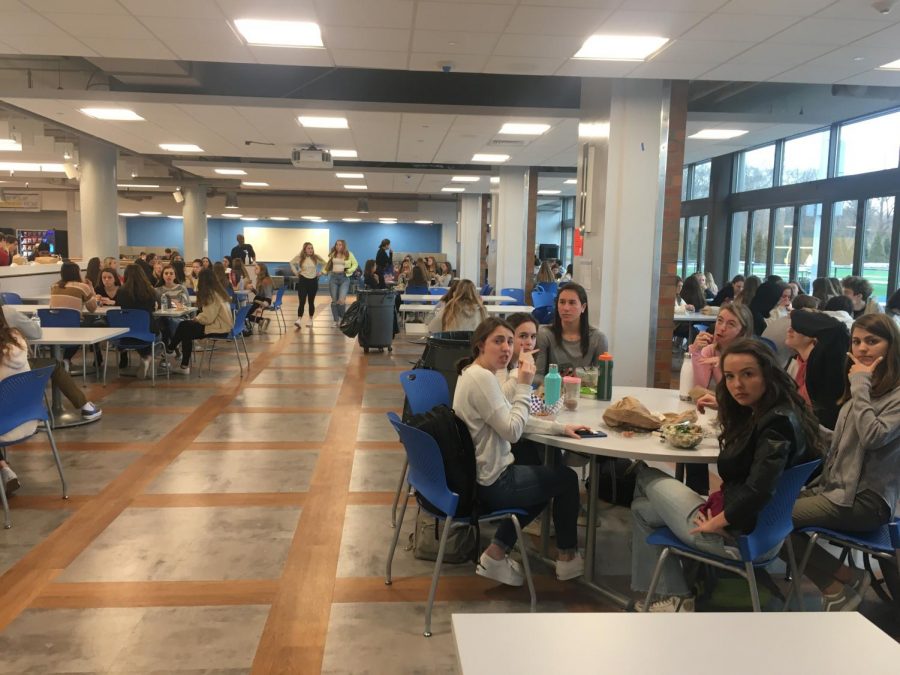 Being a Freshman was Different Three Years Ago

Over the years, the implications of being a freshman at DHS have changed greatly. No longer do Freshman have to squish into 3 tables in the cafeteria, no longer do they have to cope with the horrors of walking past the senior section as the senior boys blast hard rap music. Times have changed, and for the freshman, they have changed for the better.

For today’s juniors and seniors, the cafeteria was a place of pure fear as a freshman. There were 4 tables for the entire freshman class to share. There was absolutely nowhere to sit, and you were lucky if you got a seat on the radiator or window. Three students would share one seat; I still have no idea how that was possible.

It was “hectic,” said senior Caroline Molloy. She says “people would share chairs or stand and wait for one when lunches changed. It was insane.” When news of the expanded cafeteria was revealed, no upperclassmen was happy. They were just annoyed that the freshman would not have to go through the same traumatic experience as them.

Sophomore Catherine Rollapp was a freshman last year who had the liberty of eating in an expanded cafeteria. “We always had a table to sit at,” Rollapp said. Current seniors can not relate.

There are some differing views on what it was like to have the senior boys blasting hard rap music out of their ultra-loud speaker during lunch time. Senior Coco Jepsen thinks it was “kind of fun.” I can agree only partially with that viewpoint. Yes, once you sat down at your seat shared with three other freshman, it was fun. But, walking by initially, it felt like every single senior guy was staring deep into your soul. It made them all the more intimidating. But, it was definitely nice to have constant music in the cafeteria, rather than the low volume tunes we now get once a week if we are lucky.

Another controversial topic is that this year’s freshmen recieved much better ipads than any other grade. They even get a Logitech Crayon, which the school had previously told the sophomores, juniors, and seniors that we would have to get ourselves. “ I think that if the seniors had the newer iPads we would be more inclined to use them over our own personal devices” Molloy said.

We both use our laptops at school daily, but that is partly because our school ipads don’t have the updated technology that the freshman ipads do. It is a rarity to see today’s freshman using anything but their ipads, because they are much easier to use than those of the upper classmen. It is a benefit of being a freshman in today’s culture.

Today’s freshmen also do not get to experience running to the office on movie quote Friday. No current senior will ever forget the thrilling rush of sending the chosen student in your class to get to the office first. Some classes would cheat and have them go before the quote was even over. They would have their phones ready to receive the fateful text that reveals the answer. The adrenaline rush you got from waiting for the text to send was unmatched by anything else. “It was most entertaining when you’d see senior boys booking it down the B-building body slamming each other,” said Jepsen.

DHS’s new Assistant Principal, Mr. Mazzone, has recently re-instituted movie quote Friday, but emailing will never be the same as running. Unfortunately, that got spoiled for us when a senior shoved a freshman into a wall and he broke his arm.

Whether today’s upperclassmen are jealous or nostalgic, I can confidently conclude that life as a freshman will only continue to get better.