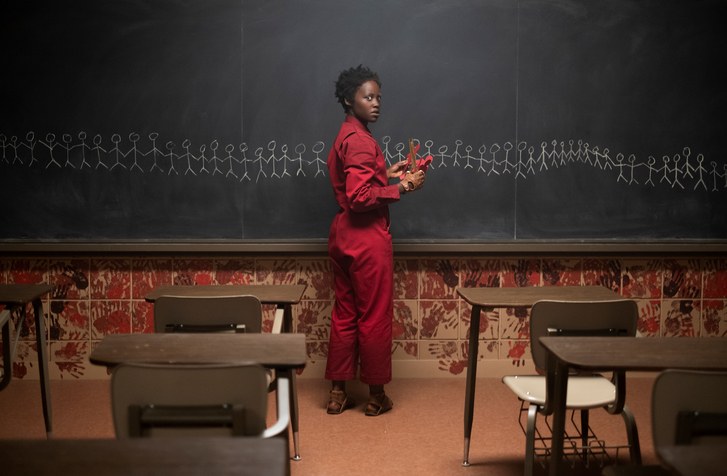 Lupita Nyong’o stars in Jordan Peele’s “Us” as both her character Adelaide and her doppelgänger, Red.

What to Watch this Weekend: Jordan Peele’s “Us”

After the success of Get Out, Jordan Peele’s directorial debut, Peele returns to the box office with a new nightmare that exceeds any of the high expectations set by his first film. Us is a horrifying look into a world of doppelgängers and revenge, and Peele shows us our own worst fears with a typical American family at the forefront of the world they often take for granted falls around them.

Peele’s Get Out still remains superior to Us. In his first film, Peele created a story that was made to be seen in theaters; I still remember my fellow moviegoers screaming and laughing around me throughout the entire film. The mix of horror, comedy, and social commentary that Peele crafted in Get Out was revolutionary.

The great thing that Peele does in Us is that he doesn’t try to beat himself. He remains aware that Get Out would be hard to top, so with Us, Peele explored a new moviegoing experience. Watching Peele’s second movie, I was hiding behind the sleeves of my jacket basically the entire time. The room was eerily silent, as we were all enveloped in the twisted mind of Peele.

It’s easy for horror movies to use jump scares to create a sense of fear, but Peele again refuses to sell out for cheap scares in Us. Instead, he uses extended metaphors and beautifully sinister imagery to create a sense of fear that is strangely familiar. In Us, Peele deals with the motifs of ostracization and worthiness, which is at the forefront of the country’s mindset with immigration and border control as a major conversation. This is no accident: even the title suggests that this movie is less about creepy people holding scissors than it is about the U.S. as a whole and how we view others.

Us isn’t an easy movie. It doesn’t give a satisfying ending, and it left me lingering over the plot and what it really means hours after I left the theater. Yet, the complexity of this movie is what makes it so mesmerizing. Everything that Peele creates in this movie is planned and artfully placed. From the graphic tee-shirts the characters wear to the imagery of rabbits in the opening credits, everything Peele creates adds to the meticulously crafted nightmare he has envisioned.

Us is terrifying. Yet, where it falls flat is when it tries to hover between emulating the comedic relief of Get Out and becoming something darker. I appreciated the snarky humor of Duke Urban’s character, but there were some points where I felt abruptly removed from the seriousness of the plot.

If you love horror movies, dark humor, and psychological thrillers, Us is a must-see.