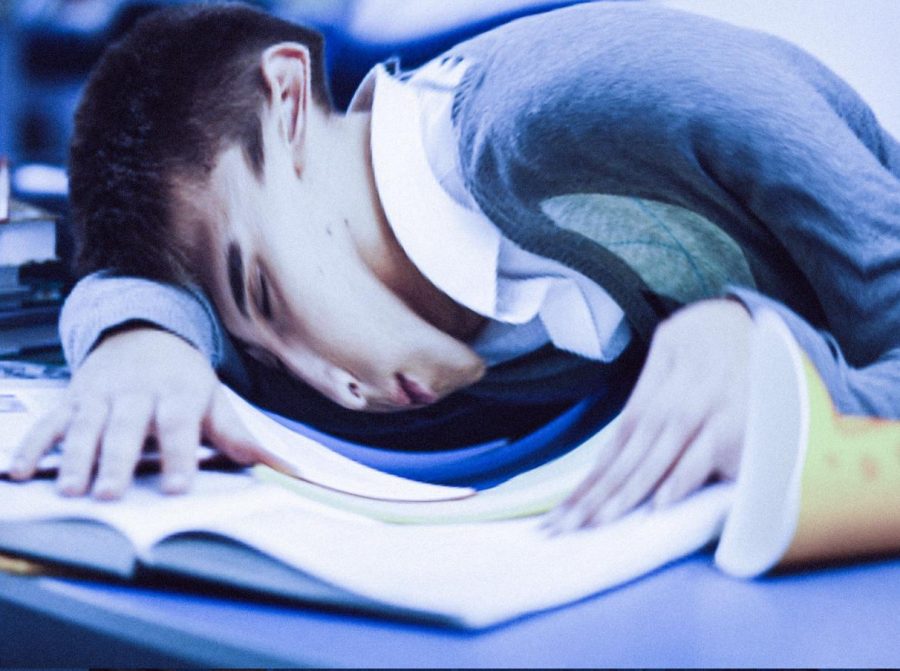 In a typical Blue Wave week, students feel the demands of school, sports, and social lives - that combination leads to extreme fatigue.

Are Teenagers Getting Enough Zzzzzs?

BEEP, BEEP, BEEP!!…This is your alarm at 6:30 am.  For many high school students this is too early to be up and starting school, especially if one is up until 11:30pm the night before. Need a bridge here – maybe As a result of this all-too-common phenomenon, many high schools across the country have started to look at later start times.

Research shows that the average high schooler should get 8-10 hours of sleep a night and pushing back the morning start times allows them to get more sleep.  In addition, research has shown that more sleep lets kids do better in school.

In his article, “Teens Need More Sleep,” published on March 30, 2017 in what publication?? , Dr. Michael Breus explains:, “A growing body of research indicates the benefits of later school times for teenagers.”  He also says that not enough sleep could be dangerous.  Dr. Breus states, “Their hectic routines, their inexperience managing their time and making healthy choices, and the often sleep-unfriendly schedule of the world around them put teens at high risk for sleep deprivation.”

Some people would disagree and believe pushing back start times could have negative consequences. One junior at Darien High School, Dan Fitzpatrick , agrees.  He explained, “. . .I think so but  there are some pros and cons to a later start time such as if we start at 8:20, then we would have to get out at 3:40. I mean I do think it [would]will be nice to get a later start time so that people can sleep in but it . . .could also has some drawbacks, too.”

In this quote,  Fitzpatrick makes a good point,  if we do pushes back the start time,  , later then we would have to get out later.  This could affect many people such as those with jobs and those who play sports. In addition, the school board has said that there could be negative consequences to impacting all the students and families in the district.   Based on student and school board feedback, pushing back start times could have negative consequences.

In contrast, studies confirm the benefits of later start times for high school academics. In her December 12, 2018 article entitled, “Sleepless No More In Seattle — Later School Start Time Pays Off For Teens,” for National Public Radio, journalist Patti Nieghmond focuses on one research study based on two Seattle high schools which shows a link between getting more sleep and better academic performance. Students who took a biology class after the later start time was implemented earned final grades that were 4.5 percent higher than students who took the class when it started earlier. In the article, senior researcher Horacio de la Iglesia states,  “That [extra sleep] could be the difference between an A and a B.” de la Iglesia also explained that sleep deprivation makes it more difficult to learn and to retain new information. However, it’s important to note that de la Iglesia says “could be the difference” – it is possible that the second group of students was better at biology or a new teaching strategy was implemented and that accounts for the increased performance.

Freshman Margaret Walter said that getting more sleep could affect her more in a positive way.  Walter said, “I could use the later start time to actually get more sleep. Usually, I don’t get a lot of sleep in the mornings because of [school]work. If I were to get more sleep, I would be more focused during the day.”

District administrators could be open to looking at changing start times. DHS Assistant Principal Mr. Paul Ribeiro commented,“So we’re always looking at new ideas;, I think there’s a lot of research about school start times. It’ll be really interesting to think about it more and figure out what’s the best one with the schedules for teenagers.”  Research shows clear indication that getting more sleep helps the teenage brain and hopefully school administrators will take this into account as they consider this issue.

As a result, there are both positive and negative perspectives on later start times for high school students.  To allow high schools to start later, districts would need to work out the complicated details of changing times for all schools.  It is evident that increasing sleep is important, for the health and well being of teenagers, hopefully schools will look at these benefits which could be very positive for high school students