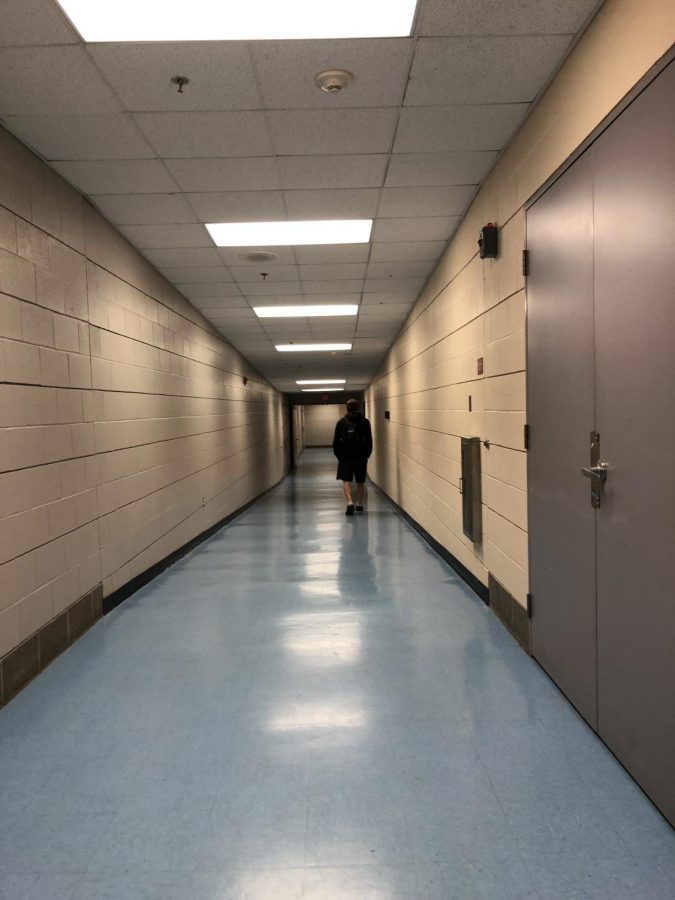 The Haunted Secret of DHS

Your Health class just  wrapped up and you have English next. The real question is… how are you going to get there?

You could take the stairs into the C-wing and go from there. You could walk through the cafeteria and take some sweet time going through three wings. You could walk across the courtyard. Or you could go to the closest hallway. Yes, that hallway.

Right next to the Wrestling Room, this foreboding hallway dares even the boldest people to walk through it. It is noticeably less painted than the rest of the school. It’s also dimly lit, and makes you feel as if something is behind you even though there is nothing there. There’s a reason why it feels so cold in that hallway and it’s not because the heating doesn’t work down there. It feels cursed, but what if I told you it was, in fact, haunted by ghosts?  It’s ghosts that cause the freezing divide between the Gym Wing and that hallway.

Now, you may not think ghosts are real, but they are there, haunting every student silently as we trudge the lengthy, windowless corridor. We all feel a bit scared when we walk down that hallway, because let’s face it, who isn’t afraid of going down that hallway? It’s a relief to have an explanation for that dread.

Who are these ghosts that haunt DHS and why are they here? What is their purpose?  To answer these questions, I hired a professional ghost hunter and we gathered enough evidence to conclude that they are the spirits of teachers and students of DHS past.

“They are real,” reported Bill Murray, ghost hunter extraordinaire. His plan was to suck the ghosts in the vacuum from Ghostbusters and examine them in one of the labs here at DHS. Unfortunately, he could not even get one. “I tried to suck them up with my vacuum, but they wouldn’t go in. I even shifted the vacuum into maximum overdrive,” Mr.  Murray said. He tried his hardest to eradicate the ghosts, but nothing worked. After a few more hours of extreme vacuuming and huffing and puffing, we still had no luck. Mr. Murray was becoming more and more frustrated. “I might have to give up my film career to get rid of these guys” he said, wiping his brow. This proves that the spirits are so tied to the school’s foundations that they can’t be removed. Perhaps they are warning students to turn around and take safer routes on their travels.

We had to get these ghosts in a container so we could study them properly. I proposed to Administration that destroying the hallway would help us with our studies. Admin was suspicious at first, but with a little persuasion and a promise never to complain about snow days again, they gave us permission. We rented a bulldozer and the hallway was destroyed. Mr. Murray was able to suck five ghosts in out of the 15 that we saw. Frankly, that was going to be enough for our studies. We took our findings to C110, where we could analyze them with microscopes. After casting it on the projector, we discovered the craziest thing about these ghosts.

“They are counterparts of teachers who used to work here” Mr. Murray said. That’s right, every teacher has a ghostly counterpart. It’s because of the insulation in the walls. Darien uses a completely different type of insulation from other schools that accidentally traps the souls of all of the teachers who work here. Most teachers don’t even know about their spiritual counterparts.  “The ones that move on from DHS think they aren’t causing any harm, but their souls take their misery out on the remaining student population because they want out, too” Mr. Murray said.

If you are ever planning to leave DHS for a long time and come back, steer clear of that hallway. It is absolutely haunted.