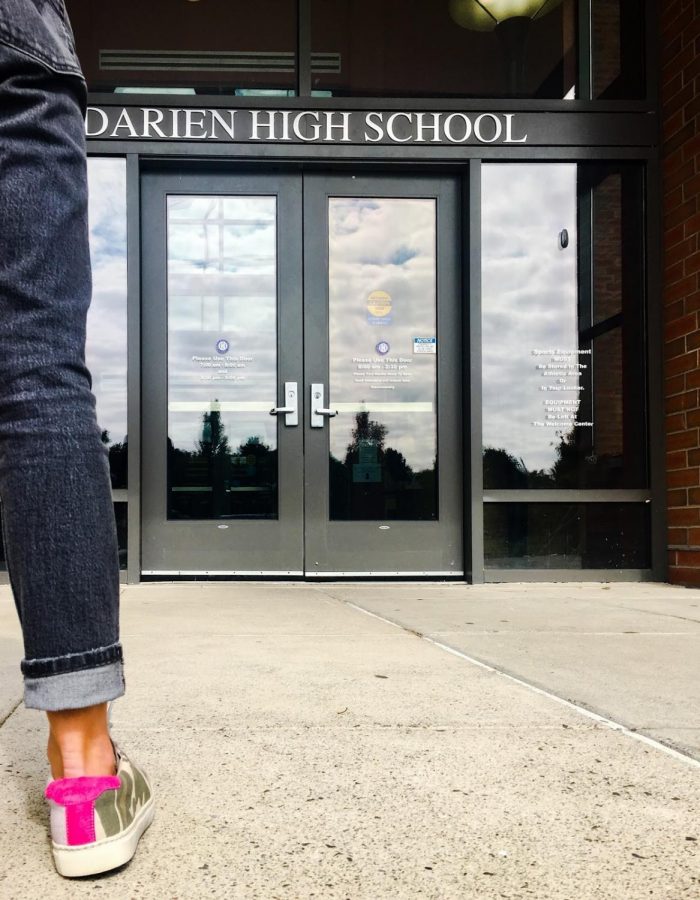 Imagine you were on a plane coming to a school you have never heard of in a tiny town in the United States. Not really knowing what to expect at this school, you ask yourself “What will people think of me? Who will I become friends with? Will life at DHS be hard?”

All these questions have been answered for the new students from all over the world who walk the halls of DHS. Teachers welcome all new students to their classrooms with open arms allowing students to feel supported and connected with their surrounding peers at the school. Although the majority of these students are leaving close friends behind, administration and students do their best to make new students feel welcomed at Darien High School.

Senior Cristina Escajadillo has given guidance to all new students, giving advice and good tips through a brand new club that she had created called the New Wave Club. Cristina has shown all new students how to roam the halls without getting lost and how to interact with other friendly students in DHS.  After speaking with Cristina, she explained to me what motivated her to begin this club: “I started the New Wave Club because I moved here as a freshman from Singapore and I felt like as a school we could do more to make the transitions easier. Moving to a new school is really hard, especially in high school, and there are so many easy ways to make someone’s day and make them feel welcome”, Escajadillo said.

Christina herself has moved multiple times; she was born in Peru and moved to Florida, Argentina, Brazil, Singapore, and Darien. Cristina has attended international schools for most of her life. She explained to me the experience of her other schools: “At international schools, kids are always moving, so the support system for new students is really strong. I created New Wave to try to replicate that system.”

One of the things that Cristina and her fellow New Wave members do to introduce the students to the community is  calling them before the school year begins to introduce themselves and invite them to orientation which gives the students an opportunity to get to know the school before the school year starts. The club does activities such as introducing students to the community by taking them to football games as a group which is planning to be done on Saturday, September 29 at the homecoming game when Darien is playing against Stamford.

New students see DHS as a helpful, inviting school with friendly students. After speaking with junior Ignacio Pacheco Jorquera, he explained to me that DHS “Is a nice place and with nice people, I think it (DHS) represents very [well] an American High school”. Ignacio came from Madrid, Spain.  Daily life in Spain is very different compared to ours. “We do all upside down compared to the ‘American way’ in Spain” Jorquero said. Ignacio has had to get used to the confusing rotating schedule and how to get around campus. Right away, Ignacio became part of the boys Varsity soccer team at DHS and that allowed him to make new friends all over school. He really enjoys being part of a friendly and open community such as the one that is offered at DHS, “I like the infrastructures, the sports, and the people”, Ignacio said.

Victor Calmon Coelho is a new sophomore at DHS and moved here from Melbourne, Australia. Victor explained to me the differences/advantages about going to school at DHS compared to Balwyn High school in Australia: “being able to use your phones is a big benefit that isn’t allowed in many other schools. . .  free dress . . . also the rotating schedule is a schedule that most other schools don’t use”. Similar to Ignacio, Victor is a part of the JV soccer team. Both Ignacio and Victor are a part of a welcoming sports team such as the one that is provided at DHS.

There are many more new students prancing through the halls of the prestigious high school in Darien. Darien High School faculty and students is doing a great job at involving new students into clubs and activities and making them feel welcome in all their classes and during every period of the day.

Students repeatedly emphasized their admiration for DHS, Victor describes how incredible everything is at this great school, “I love Darien High school . . .everything is wonderful from the newer buildings, to the engaging teachers, the sports, the frees, and being able to use your phones”.