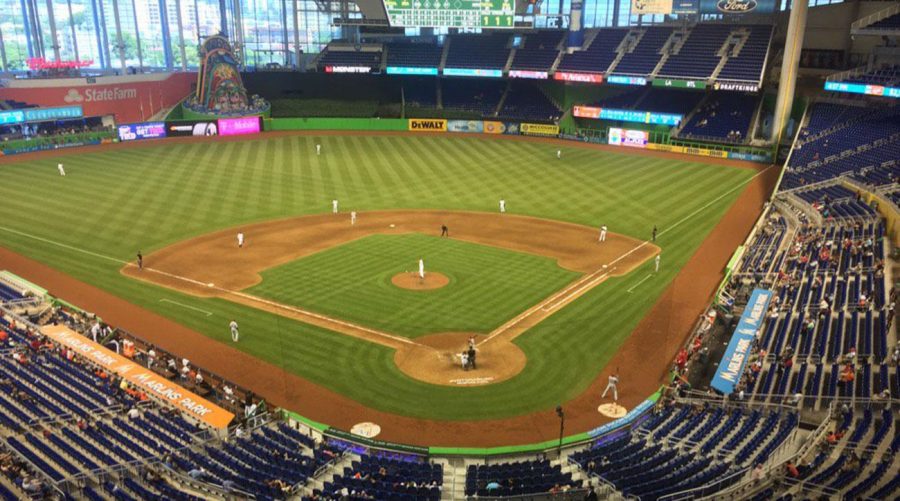 The Death of Baseball: A Fear Becoming Reality With Every Empty Seat

There’s nothing like going to the ballpark on a Summer day. Sit back, relax, grab a hot dog, and maybe even snag a foul ball, what’s not to enjoy? For years baseball has been considered America’s pastime because of all of these reasons. Going to a baseball game stood as a place for adults to escape the rigors of everyday life, and for kids to see their heroes play the sport  they loved. Obviously the game can be watched on TV or listened to on the radio, but you just can’t beat being there in person. Despite this, the MLB’s popularity has experienced a steep decline in the past decade or so, as fewer people are attending the games in person, and even fewer are watching their teams play on TV.

The busy metropolis’s that baseball stadiums used to be in the days of Joe Dimaggio or even Mark McGwire are no more, and teams are simply not selling as many tickets as they used to. According to Forbes.com, “The 2017 regular season marks the third consecutive season of total attendance declines, and five out of the last six that saw drops.” This startling decline in attendance can’t be a huge surprise for League Commissioner Rob Manfred and the rest of the front office, for years now people have complained about the games being too long, not very exciting, and the absurdity of high ticket prices and expensive stadium amenities.

The final complaint on that list is one that anyone who has been to a stadium, even the baseball purists, can relate to. The once quintessential hot dog and soda (or beer if you’re 21) that you could order for the whole family without batting an eye (“batting”, get it?), now costs about as much as a meal at Capital Grille rather than a weirdly shaped meat thrown in a bun.Obviously that last assessment may be a bit of a stretch, but seriously, the cost of food at baseball games is nothing less than laughable. The plethora of dollar signs at the ballpark can be seen no more than an hour away from your doorstep, at either Citi Field or Yankee Stadium. I went to a Yankee game over the Summer and spent nearly 20 bucks on chicken fingers and french fries before the 2nd inning even started. On top of that the Yankees lost, so that was a real buzzkill of a day.

Despite the fact that the prices are in fact absurd, this issue should not be at the top of the MLB’s to do list in terms of making the game more popular. Above all else, the league absolutely stinks at marketing the game. One of the most important facets of a popular league is having a star player that makes people want to tune it to watch them; the MLB has several, but they have failed to give any of them much fame. Bryce Harper, Mike Trout, and Aaron Judge, for example, are three players that have taken the league by storm and are still in their 20’s, meaning they’re hitting their athletic peak right about now. These guys obviously garner plenty of fame around their fan bases and a good amount nationally, but they have yet to become icons.

This feels even more ridiculous when you consider the records these guys are smashing. Mike Trout for example, is on pace to have the highest Wins Above Replacement rating (the overall effectiveness a player has on his team winning) in a single season ever in baseball, 14.3. The last player to have a WAR even within 14 was Babe Ruth in 1923. Despite this, most people would not be able to recognize Trout if he walked into a bar.

Aaron Judge, on the other hand, is the fastest player to ever reach 60 home runs, taking him just 197 career games. While Judge may feel like a huge celebrity to you and I because we live in the New York City region, but to the rest of the country Judge is hardly on the radar despite the fact that he is crushing records.The NBA has done a great job of making their young talent into nightly characters, and the MLB should try to model a plan after what they have done. Players such as Giannis Antetokounmpo and Russell Westbrook make jaw-dropping plays every night, and the NBA spreads the video as much as they can. Anyone can put up a video of a highlight on Twitter or Instagram of a cool dunk they see, and within minutes it goes viral. The MLB, on the other hand, doesn’t let anyone but themselves put up a highlight of a play on social media. So if Aaron Judge hits a  490 foot home run or Mike Trout throws a guy out at home from center field, maybe you’ll see the video of the play a few days later, if you’re lucky.

Another common complaint of baseball is the fact that the games are simply too long. There’s not many people left who will sit down and watch an entire three and a half hour baseball game, and certainly no one under the age of 30 is doing this, myself included. Despite some exciting moments, baseball is an extremely slow moving sport that doesn’t offer constant big plays like basketball or football. Due to this, the MLB has struggled to connect with the younger generation of sports fans. Besides a few exceptions, no one at DHS watches the sport regularly until the playoffs roll around, if at all.

The MLB should absolutely adopt fewer innings of play. In high school we play seven innings and I think this would fit perfectly for professional baseball”

To their credit, the MLB has made efforts to shorten the game, but they are extremely minor changes that won’t do much. These changes have included making a set time in between innings (2:05 minutes), limiting each team to six mound visits per game, as well as a 30 second clock between pitches. These small efforts would only take off 10 minutes from games at most, and have not pleased any of the league’s younger fans.

The DHS Varsity Baseball team (who currently have an 9-2 record) have plenty of thoughts on what the MLB could be doing to shorten games and appeal to younger viewers around our age. Some players feel that making the games fewer innings would appeal to many more fans and simply make it more exciting.

Senior pitcher Jackson Vaught is a big advocate for this idea, saying, “The MLB should absolutely adopt fewer innings of play. In high school we play seven innings and I think this would fit perfectly for professional baseball. They would be able to attract a new demographic of fans and the game would be more fun to watch.”

The argument against Vaught’s point of view comes from baseball purists, who of which there are many. Baseball is all about stats and records. A shorter amount of innings would completely change this concept. Players would get fewer at bats, pitchers wouldn’t throw as many pitches, and the holy grail of baseball history, the perfect game, would mean much less as pitchers would not be throwing a full nine innings. Among other things, baseball fans, who are generally on the older side, are not very open to changes of “America’s game”.

Many people arguing for a rule change can cite what the NBA did in 1979, adding the three point line to the game. The three pointer completely changed the game and many fans were reluctant to it at first. While it can be argued that it skewed stats, it is a fact that it opened up the game to many different types of new players, and today teams such as the Golden State Warriors build championship runs around it.

Senior outfielder Fin Batson, while understanding this argument, believes that the MLB should stick with the nine inning concept, saying, “I don’t think they should limit the amount of innings in a game but make a change in the pace of play throughout a game.”

As I mentioned earlier, the MLB has spearheaded some changes to speed up the pace of play, but they have not been very substantial. If not shortening the game itself, some changes to make the pace of play faster could be, forcing batters to take less time between pitches or even allowing a foul ball with two strikes to count as strike three. While these ideas are hypothetical, they could be much more effective than what the MLB has done thus far.

Senior catcher Arthur Xanthos agreed with Batson, telling me, “I believe that limiting the amount of innings would only push away the die hard fans, which would hurt the MLB much more in my opinion.” Xanthos is voicing the opinions of many, as Rob Manfred and the rest of the front office are terrified to lose the few die hard fans they have left by making a major change to the game.

Other than the game’s themselves being extremely long and tough to watch, the season itself is the longest by far of any professional sport. The reason so many people watch the NFL is because there are only 16 regular season games, every single one is important. The baseball regular season, on the other hand, is 162 games. It’s not hard to see why someone wouldn’t watch a meaningless three and a half hour game in June when the season still has almost 100 games left.

Unlike the shortening of games, the shortening of season argument does feel a little more practical and could be more appealing to the baseball purists. This discussion was recently sparked by Cubs first baseman Anthony Rizzo when he made comments on a radio interview on Chicago’s WMVP-AM, saying, “I think we play too much baseball.Yes, guys are going to take pay cuts. But are we playing this game for money or do we love this game? I know it’s both, but in the long run, it will make everything better…”

Rizzo’s willingness to take pay cuts is a huge step in the right direction for supporters of a shorter season. Being a star player on a team that won the World Series two years ago means he serves as an ambassador for the league, and hopefully his comments will give the league office something to think about.

Senior outfielder Max Gasvoda agreed with Rizzo and feels it would be very good for baseball as a whole, telling me, “I think more people would watch if the MLB season were shorter. It would make each game matter a little more.” While Gasvoda’s reasoning is clear and pretty easy to agree with, as more important games means more people will watch, he doesn’t have a whole lot faith in the MLB, continuing to say, “I really can’t see this happening anytime soon though as baseball prides itself on tradition and the MLB has played 162 games for a long time.”

The tradition argument is something that will always be a part of baseball. Fans are terrified of anything new and feel the sport is meant to be played in a certain way, not a new one. Being a long time baseball fan myself, I can see where the old people (sorry, “baseball purists”) are coming from, but I also don’t want to see the game die. No fans means no money, and no money means the quality of play decreases, meaning the sport will get a lot less attention and less TV time.

This leaves baseball die hards to consider: would they rather their favorite sport die stuck in last century, or adapt to the new age of play with the likes of Aaron Judge, Bryce Harper, Noah Syndegaard, and many more once in a lifetime players?