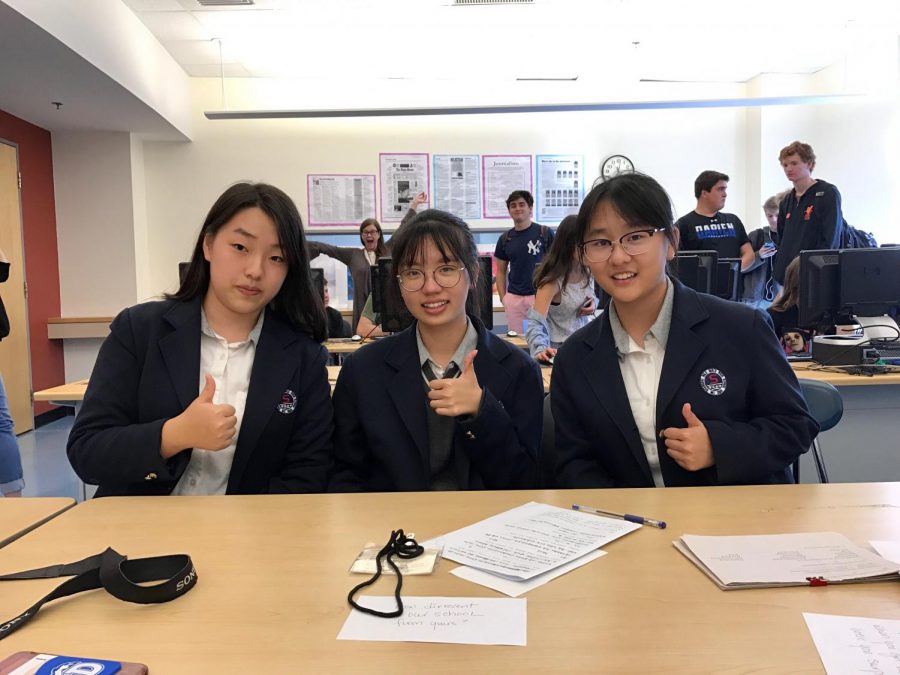 Neirad Gets A Special Visit From China

On October 4th, 2017, Neirad welcomed three special guests, Chrissie, Tina, and Rebecca, into our home, Room B210. Those three special guests were three girls from Shanghai, China who were participants in Darien High School’s China Exchange Program (“Chex”). We decided to make their visit to Neirad a playful one and began class with the exciting American game, Four Corners. Chrissie outsmarted our Neirad team and her two friends from China and came out on top with the win. After playing, senior Carson Halabi, junior Alix Platt, and I sat down with the Chinese exchange students. We talked about the highlights of their visit to Darien, the differences in our lifestyles, and even touched on the topic that all teenage girls must address: boys.

During their stay here in the United States, they had the opportunity to experience American culture as they lived with DHS families and traveled to New York City, Yale University, and Washington D.C. In NYC, they went on a boat on the Hudson River and had the chance to view the iconic Statue of Liberty. Chrissie, Rebecca, and Tina especially enjoyed the food here. When we asked the girls how they liked the food, Tina responded and said, “It is so cool. So cool. The pizza is bigger.”

There are many differences between DHS and China and some of these differences are quite surprising. When Halabi asked about how DHS was different from their school back in Shanghai, Chrissy responded and said, “You are more positive. You always raise your hands but we do not.” Tina then interjected and said, “You can go to the bathroom!”

From the responses of the exchange students it is evident that in China, the life of a teenager is centered around studying and there is not much time for play. Platt asked the three girls about what they do in their free time, and their response was shocking to us.

“We have no free time,” Chrissie said. Platt, completely astonished, then asked, “what about on the weekends?”

“No, we do not have free time then. We have extra classes. We have to study and there are teachers from out of our school who teach us more and push us to improve. We have one day for class and one day for homework, so the whole weekend is about study,” Chrissie said.

Another surprising difference is that at DHS most students flee to tropical destinations to relax by a pool or ski resorts during vacations, but according to Chrissie, Tina, and Rebecca, vacations in China differ as they are full of constant study. Similar to their weekends, during their winter and summer vacations they have extra classes.

Chrissie, Tina, and Rebecca all emphasized the importance of the test, Gaokao, which is also known as The National Higher Education Entrance Examination. This test is similar to the standardized tests that we all know and dread, but it does differ as a Chinese student can only take it once and it solely determines if a student moves on to university in China.

“We study so hard just to prepare for this test. This test is so important for us. If we do well on this one test, we can go into university,” Chrissie said.

One characteristic that stood out to me was the humor of the three exchange students.  When I asked the girls what their favorite class was back in Shanghai, Rebecca’s response was priceless.

“I like history because I can sleep,” Rebecca said. Despite having lives that are dedicated to serious study, Chrissie, Tina, and especially Rebecca are able to sit back, laugh, and entertain those around them.

October 4th, the day in which Halabi, Platt, and I met these three brilliant and admirable Chinese exchange students was definitely a day that I will never forget in Neirad. While we may share some differences, that did not stop us from having a friendly conversation and learning more about each other’s lives. I encourage those of you who will be here at DHS next year to get involved with China Exchange as it is an opportunity of a lifetime that allows you to make friendships and learn more about a culture of a country that is 7,130 miles away.