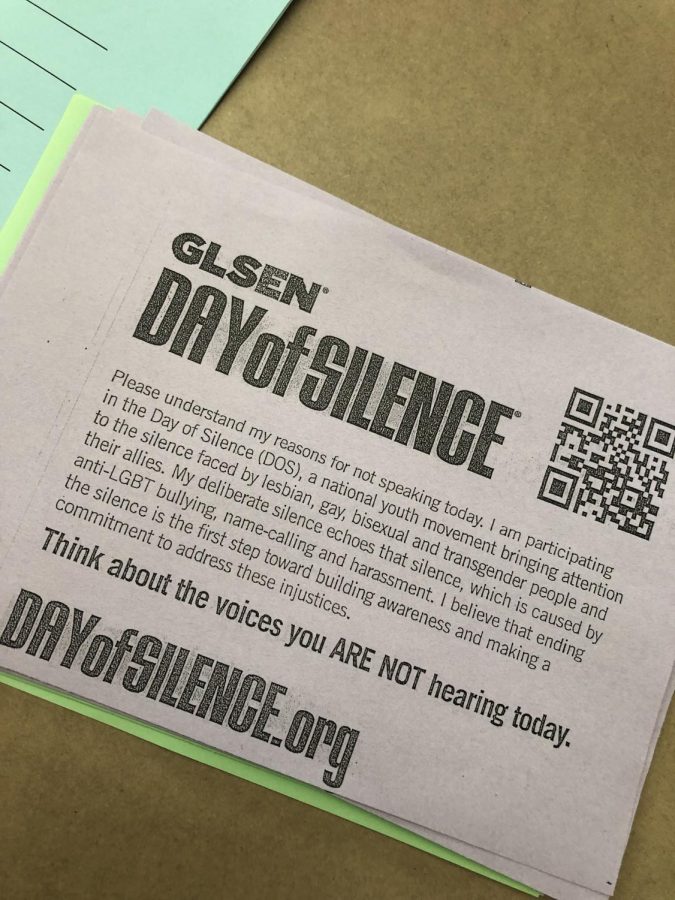 Speaking Up About the Day of Silence

In a rich suburban town, the LGBTQ community is not as alone as it may seem.

It’s hard to imagine a suburban, rich school to be supportive of the LGBTQ community, but that is what surprisingly happened at DHS on April 24, 2019. The GSA club held the Day Of Silence once again this year, and I’m so glad to say that it was a success. For those who don’t know what the Day of Silence is, the Day of Silence is a whole school day where a student or faculty member can voluntarily sign up to stay silent all day to show support and respect to the LGBTQ community. Along with seventy-one other people, both students and staff combined, I proudly joined in with the rest of them. I have only recently become an open member of the LGBTQ community, and with the rest of GSA members and other people that participated, it’s a warm feeling to know that I’m not alone and that I shouldn’t be afraid to be myself.

Participating in the Day of Silence means that you would not be able to talk at all for the entire school day. At first, this might seem slightly impossible – I thought so too. As it turns out, being silent didn’t take away any fun from my day or made me feel like I was missing out on something. Instead, I felt closer to the members of the LGBTQ community and it made me feel proud to stand in solidarity with the rest of those who participated. Seeing someone else wearing a Day of Silence sticker on their shirt meant exchanging a slight nod and a confident smile radiating with it, and that was by far more meaningful than any conversation.

Of course, not everyone will always have positive thoughts on the LGBTQ community. The most difficult part of participating was holding my tongue when I heard someone make a rude remark on the Day of Silence. Even if it wasn’t a rude remark, there were still comments of confusion which made me want to leap out from anywhere that I was sitting – but I couldn’t. Even though GSA handed out talking cards that explained why we were joining the movement of Day of Silence, it still wasn’t enough and not EVERYONE that says something will be able to get a talking card, let alone bother to read it.

There have been multiple times where I have heard random students exclaim “Why are we even having this Day of Silence?! Doesn’t it make more sense to talk about it?!” In some ways, I understand what they were trying to say. Obviously, it’s great to talk about the LGBTQ community and it should be something that our school strongly supports and encourages – but that’s not the objective of the Day of Silence. We know what it’s like to talk about the LGBTQ community. It’s a topic of everyday conversation in today’s world and, quite frankly, the U.S. and this school have done a pretty good job so far.

However, people that don’t know what it’s like to be in the closet will never know how isolating and lonely it feels. From personally being in the closet for a long time, I can tell you – it’s a scary experience when you have no one to talk to and you feel like you are doing something wrong or that you’re “committing a sin.” It’s a lot to deal with when you begin to question your sexuality because then you start to question yourself and your upbringing as a whole. The Day of Silence is a chance to recognize those who HAVE stayed silent and understand what it’s like. When we talk about it, we can easily just shrug it off, but putting yourself in someone else’s shoes is a much more meaningful and special experience and it gives you a true idea of what you think about the LGBTQ community and how members of the community might not be so different from you.

I decided to talk to senior Amina Mobarik, president of the GSA Club, to get a scoop on what the Day of Silence means to her and how it felt to accomplish such a big task. “It was such an amazing experience and I’m so happy I got to be a part of planning and experiencing it,” Mobarik said. “The amount of people I saw participating in it that day was just amazing, and Paige Tyler, our speaker, was such an awesome person to have come speak for us! Overall, it was just a great experience, and I hope we keep it up and continue it long after I leave!”

I also spoke with French teacher and adviser of GSA Ms. Susan Mason to see what it was like to plan to event as a teacher and what concerns she had for students that were participating. “Each year I worry that students might be harassed or teased for remaining silent,” Mason said. “This year, however, we were so pleasantly surprised to learn that participants were overwhelmingly supported by friends and classmates, even admired for their self-discipline. I have also noticed that many teachers and staff continue to wear their rainbow ribbons.”

While we are mostly always concerned about students being discriminated against, this year, we, myself included, were all surprised that an immense number of people showed kindness and support towards all students that are part of the LGBTQ community. I personally hope that the Day of Silence will be something that our school will be doing every year and that we will be gaining more and more support as we go. 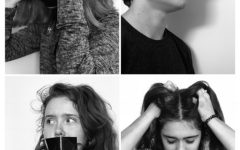 Darien in the Dark: The Truth About Mental Health