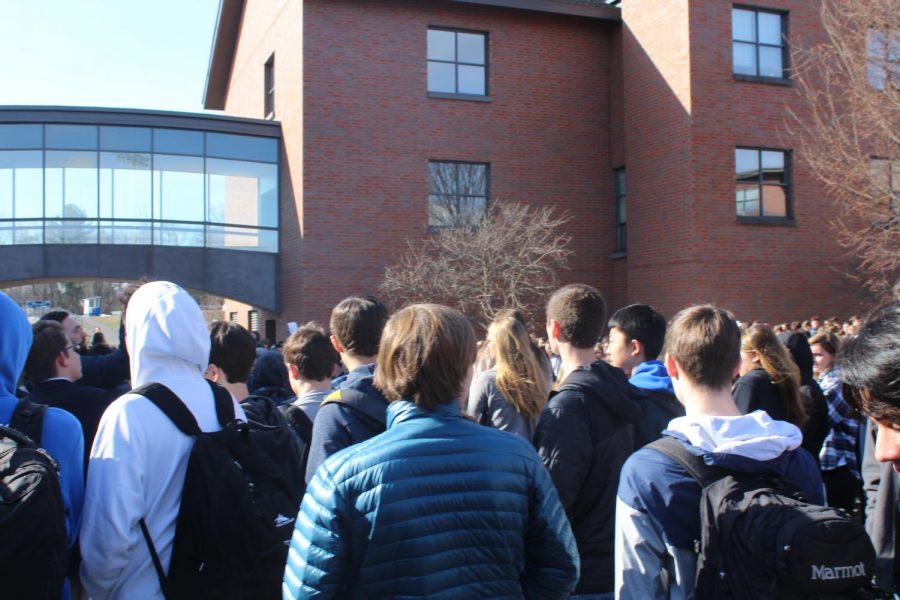 Should I try to go out the window? Maybe I should attack the shooter…What if I take a chair and throw it at the shooter! It’s useless, I should just surrender to the principle of pretending like my class isn’t in the classroom…

These are all thoughts that most students have already had. The thought of an actual shooting happening at our school seems unreal, that “it won’t happen here.” Yet almost every student has had these thoughts anyways. We all feel like “sitting ducks,” and that when the time comes it’ll be by luck that we get out alive. We shouldn’t have to feel this way in a school, nonetheless we do.

What happened at Marjory Stoneman Douglas High School stands as the final testament that enough truly is enough. The rise of walkouts in the wake of the shooting demonstrates that teachers and students alike feel that something, anything, needs to be done. Schools around the world from Tunisia to Hawaii decided to take part in the walkout conducted by the Women’s March on March 14th which led to a few students, myself included, to form a committee to organize for Darien High School to take part in it as well as upcoming ones.

The committee was originally two separate groups that wanted to organize a walkout, and as soon as they found out about each other, they decided to combine. Other members were picked based on a variety of factors such as their political views. The committee wanted to get a broad political spectrum, so conservatives, liberals, and even independents alike were chosen.

“This is a controversial issue that people have different views and opinions and the committee represented these conflicting views. So even though the ultimate goal was to honor the victims, individuals decided to honor them in a way that reflected their personal beliefs,” junior Katherine Lester, a member of the committee, said.

Another key aspect of the committee is that it is entirely student-created and student-led. Yes, the faculty and administration know about our work, but all the decisions and ideas involving the walkouts are entirely done by the student committee. Administration only attended a few of our meetings to validate that students will not be suspended for walking out and to discuss safety concerns.

Politics aside, we are all concerned with the safety surrounding schools and all wish something could be done. Almost everyone is upset over Congress’s failure to pass more protective laws in light of Columbine, Sandy Hook, Parkland, and countless others. 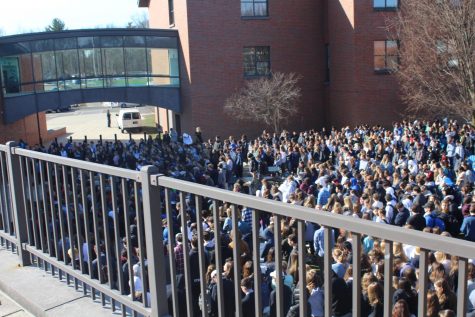 Around 600 students attended the walkout on March 14th where the student committee led a memorial for the Parkland victims.

These walkouts are meant to demonstrate that students, faculty, and parents alike are fed up with the inaction to make schools safer and demand that our voices be heard. Students are rising up because we are the change that is about to come, and Congress better start paying attention now.

“What America needs to do right now, is listen to the youth. We have grown up in an era where school shootings occur annually. After the tragedy in parkland, high school students across the country found their voice, and we demand to be heard. We will no longer be silenced because we are ‘teenagers,’ because ‘what do we know,’” junior Liliana Cullen, a member of the walkout committee, said.

That’s why the committee has brought up significant safety concerns that students have about the building as there are tangible changes that could possibly happen to lessen their worries. Most students recognize how problematic it is to have all the courtyard doors be unlocked during the school day, which enables anyone to enter the building. A proposed solution would be to only have students with ID’s to be able to enter the building through a specific door scanner. While this may help with student woes about the school’s safety knowing a random person couldn’t enter, there are potentially negative factors that inhibit its use.

“Obviously it’s going to cost money.” Sergeant James Palmieri of the Darien Police Department said. “I don’t think it would be difficult [to set up]. All you have to buy is the reader machines and then whatever ID’s you’re going to give everybody. The problem’s going to be sort of like a cultural thing like, look at the traffic out there now and now everybody is going to be lined up at the front door trying to swipe their card.”

Through the meetings that the committee has conducted with Dr. Daniel Brenner and Ms. Ellen Dunn as well as other Darien High School administrators, we have also voiced the unease that students have when it comes to the actual lockdowns. Many students genuinely feel confused about the exact lockdown protocols that are in place, such as if a teacher is allowed to open their classroom door to other students once the drill has started. 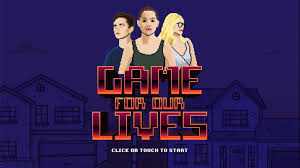 Game For Our Lives is a browser game where the player has to reach the offices of congressmen and lobbyists in order to stop gun violence while dodging NRA supporters. The player can play as Emma González, David Hogg, or Delaney Tarr, the major advocates in the March For Our Lives Movement and survivors of the Parkland shooting. Once the player reaches the offices, they must fight the “bosses”: the lobbyists and congressmen. You can play the game here: http://www.gameforourlives.com/

Students might feel safer knowing that a new lockdown system will be put into place. Dubbed the “Blue Light System,” it enables blue lights to flash throughout the building once it has been initiated, much like the white lights that go off during a fire drill. The system also features a voice that states a lockdown is occurring, and instantly sends the police a notification. This might be especially reassuring after the scare that happened at DHS last year, when there were reports of a threatening drawing in a student bathroom. However, talks of a system like this have been underway for a long time.

“I can’t really say, like, exactly when it was installed but I mean, it was sort of as a result of the past three years. I don’t think it was any one incident [that led to the installation],” Sergeant Palmieri said. “I was actually involved in a meeting and we went down to New York and looked at some systems, so I don’t think it was because of any one thing. It’s sort of been like, unfortunately, every year something happens so it was sort of . . . cumulative.”

The safety talk that happened after the March 14th walkout was created as a means to make students feel safer, as the committee brought up the fact that many people didn’t know where to go if they were caught in a place other than a classroom such as a bathroom or a learning center. The committee hopes to continue the discussion about safety in our school, whilst trying to find ways that DHS can take part in the national movement that is trying to combat the violence that continues to threaten schools across the country.

We students as a generation have had enough of the gun violence occurring in our country, and have felt the remains of its destruction like a national heartbreak. We shouldn’t have to be called the “Mass Shooting” Generation because it only reflects the failure of politicians to enact proper laws to protect us, and neglects all the change our generation can still have to offer. We are the game changers, the “Second Progressives” that are going to advocate for a better society even if it means being disobedient.

There will be more walkouts after the full-day one planned for April 20th. Students will keep walking out of our schools until we no longer have to worry about risking our lives in order to get an education. 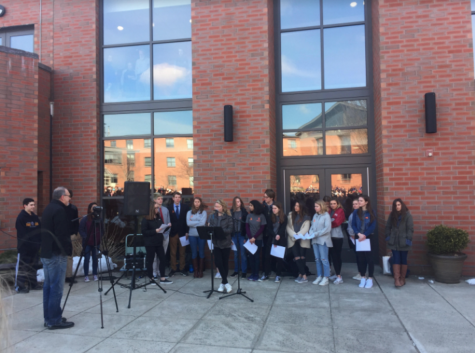 Each member of the student committee read a 30-45 second blurb about each of the students lost at Parkland. (Photo Credit: Dan Arestia of the Darien Times)