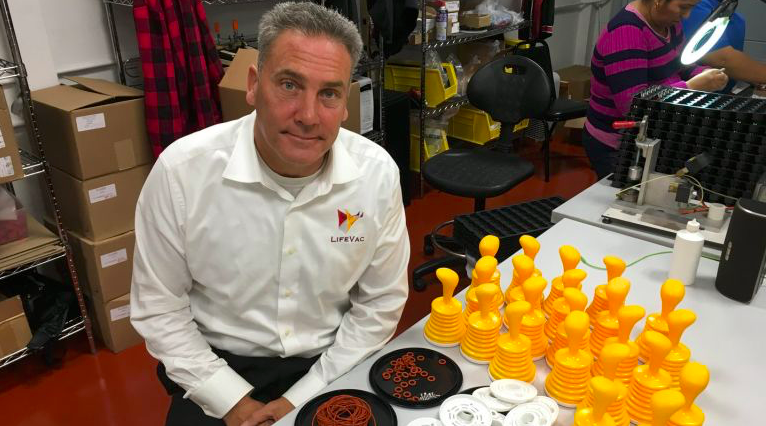 Entrepreneur Arthur Lih invented a product that is saving lives.

At 6:00 p.m, entrepreneur Arthur Lih was working with the rest of his colleagues to pack up boxes. After recently being featured on Fox News, there was a mass order of his product Lifevac. In his garage, he was sitting down at his desk talking to me with his Dunkin  coffee cup that looked like it had been there for a while. With him were Mike Singer and Steve Olivari, who helped create the Lifevac concept. There were many people beside Lih working on packing up the hundreds of boxes that would later be shipped to people’s houses and businesses, and to possibly save lives.

When I first saw him, he was wearing a grey T-shirt and smoking a cigarette as he greeted me with a hello, and pointed at the hundreds of boxes that surrounded him near his driveway. “Postman gonna have a heart attack when he sees what we brung ’em [sic],” Lih said. We go on to talk about the thing that changed Lih’s life forever – his product Lifevac.

Lifevac is a device that can be used if a person is choking when the Heimlich doesn’t work. The device is as simple as placing the mask on the victim’s face, pushing down, and pulling up the yellow handle as it sucks the obstruction out of the person’s airway. The product is patented and FDA approved, is located in 201 schools, and has saved 22 confirmed lives in countries such as the U.S, the UK, Spain, Greece, Canada, Australia, and South Korea. The device recently saved a three-year-old who was choking at IKEA.

Singer helped Lih build the prototype of the device, and when asked about what he thought about the business, he responded with, “When Artie had the idea, I thought how amazing it would be to save other people. Choking is a big problem… what a great way to live your life saving other people,” Singer said.

Eight years ago, Lih was inspired to create the device after his friend Oliveri witnessed a tragedy. Lih stated, “Well, I was visiting my friend in the hospital, and he pointed across the hallway to a gurney and said, the last time I was here, there was a seven-year-old child who died from choking on a grape. I thought of my daughter, Jackie, you know, and she was seven at the time. I said you know, why didn’t they Heimlich? And he said well, it didn’t work. And I said what? And that was the first time I started to understand that it doesn’t always work. So I decided that, you know, I couldn’t let Jackie just die in my arms, so I decided to make something that would work when the Heimlich didn’t”. From that moment on, Lih became inspired to invent a device that would prevent this tragedy from ever happening again.

Before Lih got into this business, he went to college at Stony Brook and majored in sociology. He had no idea that he would one day help make the world a better place with his invention. This business was just originally an idea, but now people all over the world are advocating for and spreading Lifevac to places where it can help people. Lih’s friend Olivari, who was the person who witnessed the boy choking on the grape, stated, “Well I think all of us are a big part of it”.

A family in Wisconsin is a big advocate for the device after losing their child from choking. “Currently in the state of Wisconsin, a family, whose little boy died, got [the device for their] fire department, the fire department got it in the state, and the state assembly is trying to get it in every school,” Lih explained. This shows how this project has grown immensely in the past few years.

Not only does his device continue to save many lives, it inspires people as well. His message to High School students who want to make a difference is “If I can go in my garage and invent something to eliminate a leading cause of accidental death, anyone can,” Lih said. Many people who have lost loved ones from choking continue to try and spread the message about how important Lifevac is, and how it can change a person’s life forever.

More about Lifevac devices and where they can be purchased can be found here. 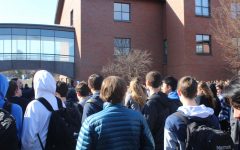 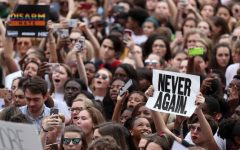 How Teens Are Changing the National Debate About Gun Control