Calming, Minimal, and Unique – The Magic of Minecraft Music 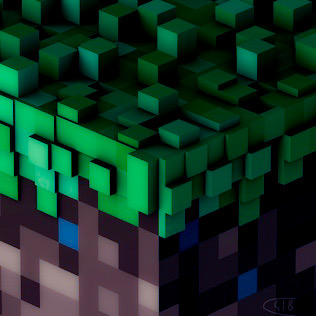 This edited cover art of “Volume Alpha” connects to the track's soothing tone.

You sit on your bed on a calm summer night, opening a Minecraft world on your laptop, and hear a series of simple but steady chords. The soundtrack subtly narrates your adventures and provides an ethereal and melancholic ambiance. “Volume Alpha” by Daniel Rosenfeld (C418) is a unique track for a unique game and an interesting listening experience.

Minecraft is an open-world video game where players create and break blocks on a three-dimensional plane. The core elements of the game include crafting tools, extracting raw materials, and building structures.

In 2009, the creator of Minecraft, Markus Persson contacted the German musician C418 to work on sound effects and music for Minecraft, which at that point had not been released. C418’s Volume Alpha was finished in March of 2011 and was incorporated into the game as background music. However, calling it just “background music” does not give it justice, as the soundtrack adds its own dimension, and doesn’t “Volume Alpha” doesn’t just sound like an afterthought (unlike many soundtracks of video games). Even on its own,“Volume Alpha” is an excellent listen.

Overall, the album is pleasant, relying primarily on strings or synthesizers for the background, bass for low tones, and a piano or another simple instrument carrying the melody. Effects are used to repeat, distort, or build ambiance to the tracks. Jamie Hornsey from “The Boar” said that “It heavily featured dynamically-triggered motifs, sounds and fragments of music.” This is largely characteristic of the volume, with many noises being isolated and simple.

Minecraft is a game where players build structures, so it may be expected that players should expect calm background music. “Minecraft”, “Clark” and “Sweden” fit these stereotypes perfectly. They are named Calm 1, 2, and 3 in the file structure of the game respectively, and as you would infer, they are indeed very calm. They are also orderly, using piano and synthesized strings. They are simple, but some of the best tracks.

Next up are “Oxygène” and “Key”. These are by far the most ambient of the bunch, i.e they do not have an orderly melody and are rich in reverb, and generally contain short bursts of irregular noise. The echo gives me a feeling of scale and the infinite nature of Minecraft.

Finally, we have “Dry Hands”, “Wet Hands”, and “Mice on Venus.”Dry Hands” and “Wet Hands” are similar as they both only use one instrument, the piano. However, the notes of “Dry Hands” are much more defined than the notes in “Wet Hands”, which often fade into each other. “Mice on Venus” is also primarily based on the piano and has just a few other noises. I don’t see any real theme to them unlike the other tracks, but they are overall just very aesthetically pleasing. They are generally the type of tracks to put a smile on your face on a rainy day.

Volume Alpha has a different meaning for every person, but regardless of who you are, I would recommend taking a few minutes out of your day to relax and just enjoy this music.