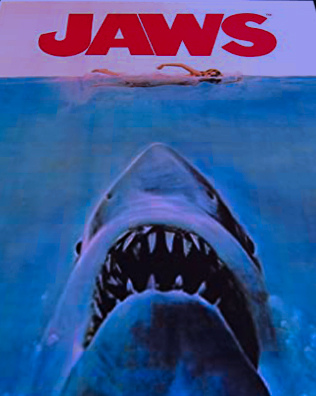 The movie famously opens in the height of summer when a young woman is eaten by our antagonist.

“I think we need a bigger boat.”

Steven Spielberg’s Jaws is an instant American Classic that has influenced almost every movie to be in office.

The movie takes place in the fictitious town of Amity, Massachusetts, a hot summer travel spot. Production was done in Martha’s Vineyard, and the movie’s legacy actively lives there today.

As I scrolled through the new additions to Netflix, Jaws caught my eyes. The movie famously opens in the height of summer when a young woman is eaten by our antagonist(Bruce the shark), as seen on the movie poster.

The film introduces the main character Police Chief Martin Brody who is an out-of-towner who quickly learns how Amity works. Brody opens an investigation on the shark attack but the mayor of Amity demonstrates how the town really works. With the fear of a shark, a loss of tourism would devastate the town’s economy.

The shark terrorizes the town and kills off a young boy when the Mayor keeps the beaches open. The story tells how one shark was able to close down a whole beach. Speilberg does a great job of creating suspense in the movie that leaves the audience on their toes.

Eventually, Brody meets with Quint and Matt Hooper, and they are tasked with killing the shark. After minor encounters with the shark, the characters begin to bond and add value to themselves. Once the audience begins to engage with these characters, Quint is killed and taken away in a bloody mess.

Brody comes up with a solution to kill the shark and our story comes to a close. As the audience gets to take a break, they begin to take in the story. Jaws was extremely effective in its storyline, acting, and effect. At the time of the film, people were so affected by the movie that they began to stop swimming in oceans and even lakes.

Today, watching the movie it is clear the effects of the action are dated, but the viewer can appreciate what the film has to offer. While many urged Spielberg to film in Hollywood because it would be cheaper, he was very stubborn about having the movie be filmed in the open seas. In an interview with EW Spielberg explained, “But had I to do it all over again I would have gone back to the sea because it was the only way for the audience to feel that these three men were cast adrift with a great white shark hunting”(EW).

The element of the filming by the sea, makes the viewing experience very enjoyable and watching our characters begin to bond together, makes the movie feel real rather than just the everyday thriller. Jaws isn’t just created to scare the public, but to make quality content. I was left satisfied as the film ended with Brody and Quint swimming away back to Amity, bringing the movie to a pleasant close.

Though the rest of the Jaws series was heavily disappointing, the original like many horror movies was a classic, and a great way to get the family together to watch a nostalgic summer classic.