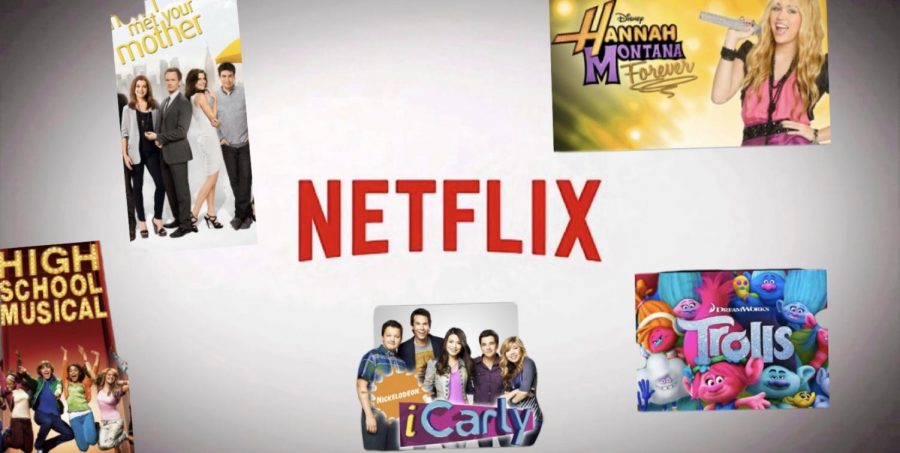 DHS Students are being deprived of their favorites, and let's just say they're not happy.

As Netflix has skyrocketted to the top streaming website over the last 20 years, it is vital to today’s screen-addicted youth that their primary form of procrastination and relaxation be stocked with the most binge-worthy content. I asked ten Darien High School students what TV shows and Movies they wanted to see in their Netflix browse section and there was one incredibly prominent theme: people want the classics. So, Dear Netflix, consider this our petition

“Honestly, I want ICarly on Netflix because One Direction was on it that one time,” said senior Olivia Maniscalco. This early-2000s classic from the undisputed best era of Nickelodeon was a staple of after-school TV watching for Gen Zs. There are no teenagers today who never thought about living alone with their brother, having their own webcast, or indulging nightly in spaghetti tacos.

Shrek, despite being released eighteen years ago, holds a firm place in the heart of 2000s babies everywhere. The love story, the testament to internal beauty, and the dozens of scenes to make you cry-laugh put the Disney film high up on the list movies we need to binge watch.

“It’s not popular enough on FOX,” says junior Nolan Burke. Family Guy, a favorite of many generations, has been on the air for nearly 20 years. Featuring the voices of Seth MacFarlane and Mila Kunis, the often twisted comedy of the animated series has become an addiction for many.

Troy Bolton: The jock, theatre kid, nice guy—a textbook heartbreaker, and Gabriella Montez: The good girl, the math nerd, the hidden star makes for a love story that has kept 2000s kids at the edge of their seats since its release 14 years ago. With a soundtrack that a 15-year-old girl may as well be exiled for not knowing, a thousand beyond quotable scenes, and two equally addicting sequels, High School Musical is a classic that will honestly never die. Dear Netflix, give today’s teenagers what they need, and let us watch it on repeat. Thank you.

“It made me who I am today” said senior Perrin Trask about the popular Disney show. Between the many halloween costumes inevitably inspired by Miley Cyrus’ blonde wig and bright early 2000s outfits, the hours spent blasting “Best of Both Worlds” on iPod Touch speakers, and the constant rooting for Hannah’s various romances, the show was as

addicting then as it is now.

The animated film was originally released on October 23rd, 1941, but its endearing animations and hopeful story of a circus elephant living with abnormally large ears and a cruel nickname eventually discovering astonishing talents have struck the hearts of millions. This true Disney classic is only one of the many original Disney films that need more attention. With the new live-action film just having recently been released, its addition to Netflix would help return viewers to its roots.

Trolls, which was released only three years ago in 2016, has gained massive amounts of praise from its viewers. Between the many big-name-celebrities sprinkled across the voiceover casting list—Anna Kendrick, Justin Timberlake, and James Corden to name a few—and the abundance of colorful characters, and energetic singing, the animated film was encapsulating to both young and old viewers alike. The soundtrack makes you just want to get up and dance, so why not have it available for the daily mood-booster everyone seems to need?

The Christmas classic, featuring 8-year old Kevin McCallister who was left at home by his huge family over Christmas vacation, can be found on almost every channel in the winter months, but what about when lovers of the movies comedy need it as a pick-me-up even when the snow melts? Kevins hilarious pranks will have families keeled over laughing for hours. That kind of comedic holiday classic absolutely must be added to Netflix.

9. How I Met Your Mother→ Ryan Smith

This incredibly popular sitcom ended nearly six years ago, and has left its addicted fans wanting more. The series follows six best friends and their crazy encounters in New York City as main character Ted recalls his twenties and thirties in an attempt to explain to his children how he met their mother. Incredibly similar to the other internationally known sitcom Friends, How I Met Your Mother is even more hysterical. Further, with Friends being removed from Netflix in 2020, it must be replaced with something to fill the void.

As one of the only non-comedic films on this list, The Notebook is a movie that all young women have been bound to cry to at one point in their lives. Boasting incredibly famous actors Ryan Gosling and Rachel McAdams, The Notebook is an unforgettable love story. Netflix must give the girls what they need: a story of love, lust, heartbreak, and plenty of drama.