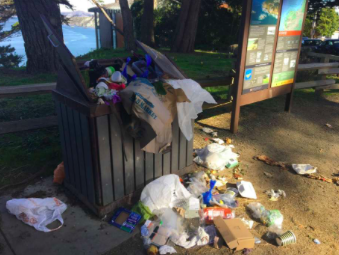 Its Time to Go Green!

As you walk through town, there is garbage on streets, in drains, and all over public areas. Civilians throw trash out the window without thinking about environmental impacts. Garbage is not the only element negatively impacting the environment, the dilemma of air pollution is affecting the environment and animal/human organisms. Due to these critical problems, local communities need to begin/continue to be GREEN! Here are five ways that students at Darien High School can continue to help the environment.

Throughout DHS, students have begun to take electronic notes. The technological change has begun to impact the environment in multiple positive ways. Increasing the use of technology has decreased the use of paper.

There is no need for DHS to continue purchasing printer paper, and that means fewer trees cut down and emissions from shipping. Sophomore Valeria Henao enjoys the use of her school-provided iPad. “I basically use my iPad for everyday needs, such as taking notes for English class or checking Google Classroom for upcoming worksheets that need to be completed,” Henao said. This tech savvy introduction is convenient for DHS, students don’t have to lug books around, and creates less trash that ends up carelessly in the environment.

Throughout DHS, multiple students bring their lunch contained in a plastic or brown paper bags because it’s more convenient then carrying a reusable lunch box. According to the Huffington Post, article written by Collin Dunn, Paper Or Plastic? A look At The Facts, Myths, And Number Of Shopping Bags states, “plastic bags create fewer airborne emissions and require less energy during the life cycle of both types of bags per 10,000 equivalent uses.” According to Huffington Post, plastic bags seem to be a better option. Although plastic bags seem like a superior option compared to brown paper bags, plastic bags continue to enter waterways and endanger marine animals. DHS students should begin to carry reusable bags in order to decrease the amount of brown paper and plastic bags.

One may think that plastic seems like an improved option, but plastic is harming the environment by polluting lands and waters that continue to endanger animals. According to National Geographic article written by Laura Parker We Depend on Plastic. Now We’re Drowning in It. “Some are harmed visibly—strangled by abandoned fishing nets or discarded six-pack rings. Many more are probably harmed invisibly.” Parker begins to go in depth about the problems with plastic in the environment endangering species of animals.

As one roams through DHS halls, most see a majority of students carrying iced coffee enclosed in a plastic container with a plastic straw. Often students arrive late to class because it was necessary to buy a five dollar iced coffee. In a viral video, a National Geographic biologist, on a boat in Costa Rica, helps a suffering turtle with a metal straw stuck up its nose.

This disturbing video has touched almost 31 million viewers all over

All the plastics that one uses should be recycled in order to decrease the amount of waste that winds up in ecosystems. According to Planet Aid, Recycling Rates Around the World, “In total, Americans generated 254 million tons of trash in 2013, which is about 4.4 pounds per person per day.” Due to this statistic, people generate a substantial amount of garbage each day. As DHS students continue to use paper and plastics as everyday resources, students should take some time into thinking of ways to decrease the use of these articles or throw them away correctly.

As sophomores begin to turn 16-years-old, the dreams of receiving permits becomes a reality.  But, according to National Geographic “Most of an automobiles’ environmental impact, perhaps 80 to 90 percent, will be due to fuel consumption and emissions of air pollution and greenhouse gases that climate scientists say are driving global warming.” Drivers need to be conscious about how they are negatively contributing to air pollution. The next time one is about to jump in the car, maybe think about taking a bike or walking. Walking and biking are great ways to get exercise and enjoy the nature surrounding you.

Participating in beach cleanups to walking/biking to get to a location has begun to create a greener environment. One needs to be more conscious about the decisions one makes and how it can impact the world around us.  As one continues to participate in environmental programs occuring in one’s community, exceptional results will begin to appear.