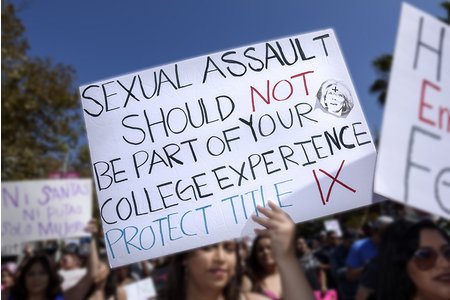 Title IX has been ignored by college educators and more and more student survivors are not getting the recognition they need.

Sexual Assault in College: It Could Be You

How Title IX and educational programs can help college students in their fight to end assault and hold sexual aggressors accountable.

Til It Happens To You by Lady Gaga (Warning: This video contains some graphic content that could be upsetting to some viewers)

Ah, college! A time for young adults to come alive and finally become independent. College is the ultimate getaway that most high schoolers imagine – no parents, no more small town, and an experience that actually allows its students to learn what they want in order to achieve their dream career. Yes, college sounds amazing – but is it all true?

Even though college has the parties, and the beautiful campus, and the perfect education . . . colleges do pose some new dangers. News reports, ranging from rape cases to the rise of white supremacist organizations on campus, portray college life as something short of idyllic. With DHS seniors going into college soon and colleges becoming less safe, it’s important to understand the statistics and what seniors going into the world by themselves can do to stay safe.

One in five women and one in 16 men are sexually assaulted while in college. ”

While sexual assault seems like it could never happen to you, given statistics, it is likely that you or someone you know is at risk of experiencing sexual assault, whether it will be on a college campus or elsewhere. Here are national statistics from the Rape, Abuse, and Incest National Network (RAINN). Sexual assault on campuses is becoming more pervasive, with 11.2% of all students experiencing rape or sexual assault through physical force, violence, or incapacitation, considering both undergraduate and graduate students in that number.

Among undergraduate students, 23.1% of females and 5.4% of males experience rape or sexual assault. First year females and transgender, genderqueer, and nonconforming (TGQN) students are especially vulnerable to rape and sexual assault on campus. Nearly 21% of TGQN college students have been sexually assaulted, compared to 18% of non-TGQN females, and 4% of non-TGQN males.

Colleges are slowly beginning to equip their students with education as to how to possibly prevent rape and sexual assault on campus. Some of that education is about teaching potential victims to be more careful.

In recent years, it is not uncommon for people to argue whether rape occurs because victims “ask for it” by dressing provocatively and/or by putting themselves in vulnerable situations that they should have never been in the first place. This is obviously a biased excuse. People should be able to dress however they want and go wherever they want; the problem is that people still assault other people. It would seem more effective to focus education not on changing behaviors of the victims of assault, but changing the potential perpetrators’ attitudes by teaching them to respect other human beings. 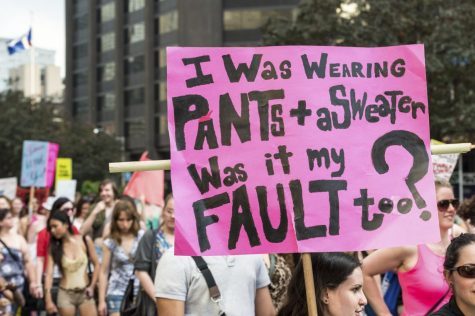 The #metoo movement has given survivors the voices to confirm the fact that it was the fault of the perpetrator, not the victim.

One thing that college students have trouble recognizing is their rights regarding sexual assault on campus, otherwise known as Title IX. Title IX covers almost everything when it comes to sexual harassment, including everything from verbal, nonverbal, or physical conduct all the way to requests for any sexual favors. Schools have obligations to follow all rules under Title IX, meaning that they must oversee any issue that affects a student’s access to education and safety. Schools usually have an official, often called a Title IX coordinator, who oversees all claims of sexual harassment and assault, and is charged with preventing its recurrence as well as addressing its effects.

While many think Title IX addresses only women in educational settings, all students are protected by Title IX, regardless of sex or gender identity. If a student reports a legitimate case of sexual harassment, the school has to take the steps to meet the needs of that student. This fact right here is extremely important. Why is that? It is because so many schools have gotten away with not helping their students. It is sometimes because the rights of the students are never made clear to the students themselves. If a college student has been the victim of any form of sexual harassment and they report it, the college has a legal obligation to investigate that claim, and, if substantiated, protect that student and that student’s right to safety. Students can also file a private civil lawsuit or file criminal charges (in the event of assault).

This lack of due process hurts sexual assault survivors as well as accused students. Student survivors have appeared before campus tribunals and have not seen their rape kit results and they have been denied access to evidence. ”

In 2015, the New England Journal of Medicine published a study on a successful campus sexual violence prevention program that essentially trained young women to “assess, acknowledge, and, if necessary, rebuff unwanted sexual advances.” The program was hugely successful in the fact that sexual assault committed against women was cut by 50%. However, one problem was that it still pinned the responsibility of avoiding being sexually assaulted on women.

The Los Angeles Times responded after saying “By focusing on a potential victim’s power to thwart her attackers, some experts warned that such a program might contribute to blaming victims.” This statement is completely correct. If there are any programs that provide information on avoiding being sexually assaulted, they all significantly suggest that the burden is left on those who are the victims. In January 2015, journalist Jan Hoffman published “College Rape Prevention Program Proves a Rare Success” in The New York Times, responding with the following statement: “It gives women the knowledge and skills they need right now, but the long-term solution is to reduce their need to defend themselves.” Even though violence prevention programs, like the one that was mentioned previously in the New England Journal of Medicine, may have been successful, the idea that they open the door more widely to blaming the victim is still something that must be addressed immediately.

The much harder work is to change the culture and to address those issues of consent.”

With keeping all of this in mind, let’s finally understand that all of the education and blame cannot all be put on those who are sexually harassed. Those who have been assaulted or harassed have already experienced enough trauma; it is morally wrong to solely pin the responsibility of making potential victims learn to defend themselves instead of teaching perpetrators not to sexually assault. It is wrong that some schools do not follow through at all with helping the student that was harassed and it is even more wrong to not make the students’ rights clear to them. The percentages concerning the numbers of sexual harassment cases on campuses should not be getting higher. While education and school policies need to be changed, it is perhaps more important to work toward eliminating these acts of violence altogether.