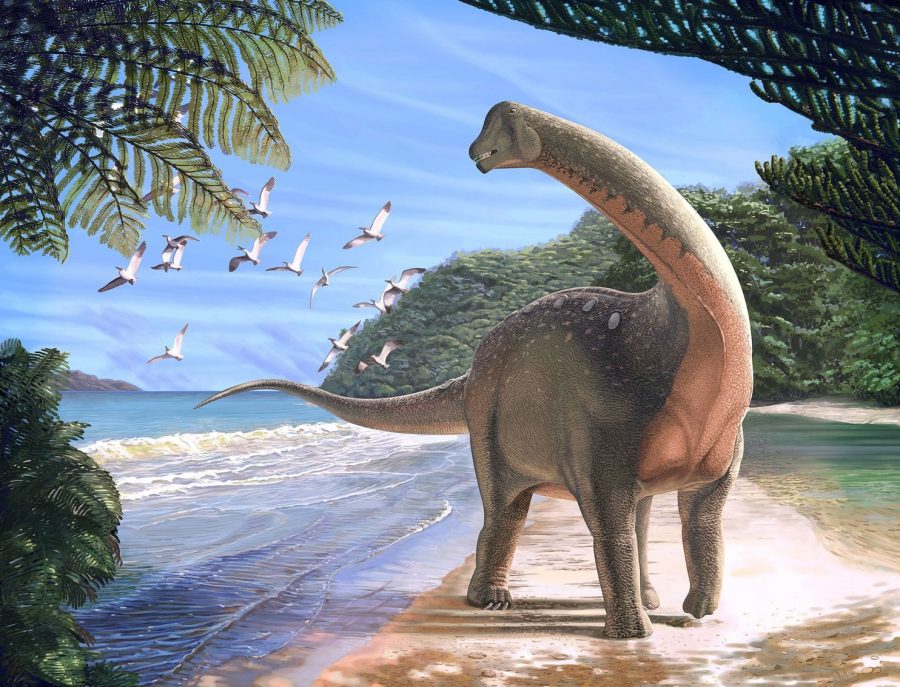 In 2014. Matthew Lamanna, a well known paleontologist, as well as the principal dinosaur researcher at Carnegie Museum of Natural History, and his team at Egypt’s Mansoura University uncovered a new species of dinosaur from the Cretaceous Period (between 100 million and 66 million years ago). According to Amy B Wang’s January 30th article : Scientists discover ‘the holy grail of dinosaurs’ in Africa in the Washington Post, Lamanna claims that he can still remember the historic day in 2014 “when a colleague, Hesham Sallam, emailed  him detailed pictures of fossils that had just been unearthed by his team in Egypt”. From a single photo, depicting the remains of the dinosaur’s large lower jaw bone, Lamanna was able to immediately decipher that the crew had stumbled upon a dinosaur. But, Mansourasaurus shahinae, a formerly unknown African species of dinosaur, is not just any dinosaur. This newly discovered species is the holy grail of dinosaurs. Professor Hesham Shallam (left), and student Mai El-Amir, prepare to glue bones of the new titanosaurian dinosaur in the field.

According to the Carnegie Museum of Natural History, who released their findings on the species on Monday, January 28th, the  Mansourasaurus shahinae was a former member of the Titanosauria group of sauropods, a long-necked group of plant eaters, that include some of the largest animals ever to walk the planet. This newly discovered dinosaur walked the planet around 100 million to 66 million years ago, at around the length of a school bus, with a weight comparable to that of the African bull elephant. The species possessed a dominant feature of bony plates embedded along its back. 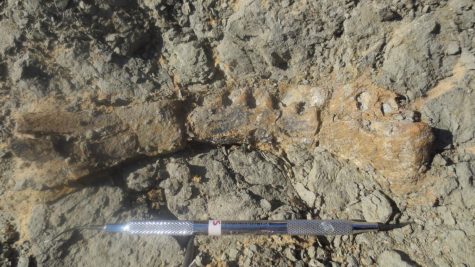 The lower jaw bone of the Mansourasaurus shahinae, as it was found in rock of the Upper Cretaceous-aged Quseir Formation of the Dakhla Oasis, Egypt.

Mansourasaurus shahinae is an incredible find. Lamanna was dumbfounded upon the discovery, stating, “These things evolved 220 million years ago and went extinct about 66 million years ago, . .even like part of a tail from one of these sauropods would have been great. … The fact that Hesham (Sallam) had found a dinosaur from the end of the Age of Dinosaurs and it was a sauropod that had part of a head, it was just completely bonkers”. And, according to DHS earth science teacher, Mr. Thilow, “Vegetation now covers and obscures much of the sedimentary rock that may preserve the bony remains of these giant animals,” making it hard for scientists to find fossils in the first place. However, despite these difficulties, the skeleton was very much intact, including parts of the neck, back, vertebrae, ribs, skull, lower jaw, most of the shoulder and forelimb, part of the hind foot, and well as pieces of the dermal plates.

DHS freshmen, Isabella Delazerda was amazed by this discovery. “It’s incredible that the skeleton could have survived this long, and remained so well intact, but perhaps everything happens for a reason…maybe now we can expand our knowledge” Delazerda said.

Delazerda was correct in the notion that we can, will, and are expanding our knowledge from this fossil. This is precisely the reason that the Mansourasaurus shahine is being called the holy grail of dinosaurs. The fossil possesses the capability of dramatically expanding our realm of understanding of the former land-dwelling animals on the African continent, as well as expanding knowledge about the former continuous land mass, Pangea. Paleontologists are ecstatic as they express the possibilities of scientific advancement that come with this discovery. DHS sophomore, Sarah Gallagher was also very enthusiastic as as she too, expressed that “The Mansourasaurus shahinae is a breakthrough, to put it at the least. In modern day we’ve made dramatic strides towards deepening our knowledge about the dinosaurs, but there’s still a lot we have to learn. Hopefully, this discovery can help us expand our knowledge”. This dinosaur will hopefully “help fill in important gaps about how dinosaurs evolved in Africa during a period when the continents had neared the end of their shift from a single giant land mass to where they are, more or less, today”.

According to Eric Gorscak, a postdoctoral research scientist at the Field Museum, “Africa still remains a giant question mark” in terms of the former land-dwelling animals. And, the discovery of the Mansourasarus shahinae is the key in unlocking long desired information about African fossil records and paleobiology. With the research team officially publishing their findings at the end of January 2018 in the journal Nature Ecology and Evolution, scientists continue to search for the answers to questions, such as what animals formerly dwelled on the African continent, and how does this species connect with species that are already well known. According to Dan Meyer’s article: New dinosaur remains a ‘critical discovery for Egyptian and African palaeontology’ from January 31rst in Business Insider, Sallam and his team have already determined that “Mansourasaurus was more closely related to dinosaurs from Europe and Asia than those from Southern Africa and South America”. Researchers have now concluded that dinosaurs could move between the continents of Africa and Europe toward the end of their time. Gorsack avidly states, “Africa’s last dinosaurs weren’t completely isolated‚ contrary to what some have proposed”. This piece could help us piece together the much bigger picture of Pangea. DHS sophomore, Angelica Yika-Nacarino, was amazed by the new information that was already discovered in such a short period of time. She stated, “it’s incredible the things we are capable of in modern day, and overtime we will continue on to find out even more”. She is right, about scientists expanding their knowledge of former land-dwelling species in Africa, as well as the whole of ancient Pangea. Gorsack has stated, what’s most exciting of all “is that our team is just getting started. Now that we have a team of well-trained vertebrate palaeontologists here in Egypt‚ with easy access to important fossil sites‚ we expect the pace of discovery to accelerate in years to come”.

Although just beginning 2018, has already launched a bright future in the realms of paleontology as groundbreaking information is discovered, with more assured to follow. However, it’s important that we first consider, and appreciate all that work that has been done up to this point and all the work that will be done in the future, to find these new discoveries. DHS science teacher Ms. Zago put things into perspective, saying, “Science discoveries are unique, in that so much of the discovery, that eureka moment, stems from the work of literally thousands of people, doing small parts, but without them, you could never get to a big discovery. And, that’s not always recognized. This discovery is incredible, but it’s important to consider that so much work happened prior, all around the world to get to this point. We advance, because of those who have made discoveries in the past. It’s important to appreciate the tiny discoveries, because without them you could never progress”.