Food: “No Longer An Enemy”

She’s sitting in our school’s cafeteria and no one, at first glance, would be able to guess what she has gone through. She’s happily biting down on her sandwich and examining what else her mom has packed her for lunch. Doing this a year prior would have been a much more difficult task for her to do. “This used to give me such–anxiety and guilt. If I could, I would try to not eat at all,” she said to me in between bites of her granola bar she has started to eat. What in the past use to make her feel this way you might ask? Her eating disorder.

We live in a community where we don’t hear stuff like this actually happening here. Everyone probably looks around and can never imagine [someone struggling with disordered eating]. ”

No personal information can be given about her, as she has chosen not to want to reveal herself. All that can be said is that her eating disorder predominantly happened in her freshman year here. Even when she tells people about what happened years later they are still shocked. What she has gone through seems unreal for people, and it’s often scarcely heard of in a town like Darien.

When people first hear the words “eating disorder” they automatically think of someone who is anorexic or bulimic. Yet, a “gray area” exists when it comes to these types of disorders. Many fail to realize that someone doesn’t have to have one or the other when it comes to diagnoses like anorexia and bulimia. This is part of the reason why she didn’t get help at first.

“I didn’t believe I had an eating disorder though,” she tells me. “I wasn’t super thin and I wasn’t making myself throw up, so I didn’t think I had one.”

There were other signs of it, however. She used to focus excessively on her calories: counting them, trying to pick the lowest calorie foods, and trying to burn off foods that she perceived had too many calories. This led her to excluding entire food groups, such as the highly popular “low-carb diet” where sugar is avoided as if it’s some kind of demon. Food for her got to a point where she used to get upset and cry after she felt she had eaten too much, when in the sad reality, she had not eaten enough. She became underweight, but not noticeably. She still appeared to be at a normal weight, which is a reason as to why noticing these disorders can be so tricky. She didn’t have the skeletal stereotypical “anorexic look” to her, which is part of the reason why she was able to deny that she had an illness. She didn’t think she was bulimic either, as she wasn’t making herself throw up. However, she didn’t realize that excessive exercising can be a bulimic behavior.

“I used to make myself go run for miles on end to burn off a food that I thought was ‘bad,’ like a cookie. I [had] been taught, of course, that making yourself throw up your food was wrong, so I didn’t think what I was doing was bulimic.””

“I used to make myself go run for miles on end to burn off a food that I thought was ‘bad,’ like a cookie. I [had] been taught, of course, that making yourself throw up your food was wrong, so I didn’t think what I was doing was bulimic.”

Her diagnosis then? EDNOS: Eating Disorder Not Otherwise Specified. This diagnosis is undermentioned in society with the vast majority of people not even knowing it exists. This is due to the anorexic and bulimic “stereotype” that is associated with eating disorders, that someone can only appear to have an eating disorder if they’re noticeably thin, are seen making themselves throw up, or avoiding food altogether. However, the National Eating Disorders Collaboration reports that about 40%-60% of people who seek treatment for an eating disorder are diagnosed with EDNOS. So while not many people have heard of this diagnosis, it’s still highly prevalent in the medical world in an effort to account for the “in between” versions of eating disorders.

The causes of eating disorders can be extensive and are, of course, subjective to the individual. Generally, causes come down to three categories: biological, social, and psychological. The biological component is still being researched by scientists, but they do think the biological connection can be caused by the social and psychological factors. There are multiple psychological reasons as to why someone can develop an eating disorder, such as: feelings of inadequacy, low self-esteem, lack of control in life, depression, anger, anxiety, stress, or loneliness according to the National Eating Disorders Association. Specifically with the lack of control aspect, many use an eating disorder to gain that control if their lives are particularly chaotic and seemingly out of their control.

“I see a lot of kids who are just totally overbooked with activities and honors classes and AP classes and they just want to do everything perfectly. So I do think that contributes to that feeling,” school psychologist Ms. Beth Shapiro said. “It’s also something that people feel they have some control over whereas some of the other things seem to spiral out of control, so people take control by controlling their eating.” 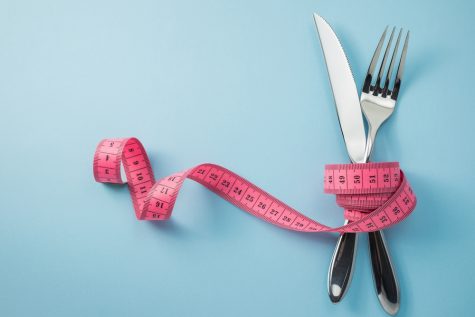 40%-60% of people who seek treatment for an eating disorder are diagnosed with EDNOS according to the National Eating Disorders Collaboration .

Asides from lack of control being one of the main causes, the social causes are also the most evident for developing an eating disorder. Almost everyone recognizes how detrimental the modeling industry standards of beauty have been on girls and boys. Throw into that the constant diet fads seen on TV and the pressure some put on themselves to look good on social media and these forces can create a potential monster for an eating disorder to develop. Sickly-named websites like “My Pro-Ana” that encourage disordered eating habits definitely don’t help either. There’s also a particular factor that’s prevalent in our town that can cause an eating disorder: the pressure to perform well in a sport. There is a misconception that one might perform better in many sports if one is a certain weight.

And there are a lot of misconceptions about diet and exercise. The only exposure that most students have towards learning about eating disorders is through a unit taught in gym class. While the unit succeeds in teaching students about the basic reasons as to why eating disorders can develop and how to “spot” if someone may have one, it neglects teaching students what differentiates normal thoughts and perceptions from eating disordered ones. It also doesn’t help that one of the main methods of teaching students about eating disorders is through an outdated, badly-acted movie from the 90s, which most won’t take seriously. What would be worthwhile is having a speaker come in to talk about their personal story, much like basketball player Chris Herren did with drug use, because it provides a personal connection that students need and establishes the reality that such matters can occur.

Many have said that 2017-2018 has been the forefront year for DHS to focus on mental health issues, but we, as a community, need to make sure to keep the momentum going. Our school especially needs to be more open to having talks about mental health, as well as continuously providing new ways for learning and understanding mental disorders. Speaking out is the greatest action someone can take against countering these disorders, including those who have the disorders themselves. It’s evidently hard for someone to come out and say that they think they’re suffering from such a disorder, and we need make sure that this stigma that someone can’t “self-diagnose” themselves ends. We need to look out for each other in this respect, and support those who do decide to come forward about what they’re experiencing.